Its history and features

The parish church of St Peter and St Paul’s

Domesday Book (1086) records a Saxon church dedicated to St Mary. This church was probably located on lower ground near to where Hanson’s Mill stands. (The mill was built in 1855 and is now a private residence.) No trace of St Mary’s remains.

St Peter and St Paul’s stands at the highest point in Burgh-le-Marsh, close to a mound known locally as Cock Hill because of its putative history as a place for cockfighting. The mound was excavated in 1933 and found to be a Saxon burial ground.

St Peter and St Paul’s consists of a nave, north and south aisles, north porch, chancel at the east end, and tower at the west. Construction of the church began in the fifteenth century, with alterations and repairs taking place during the eighteenth and nineteenth centuries. The current chancel, for example, was built during the Victorian period.

Inside, there is an elegant arcade, above which is a row of clerestory windows, side chapels and a magnificent tower arch. A Rood Screen separates the nave from the chancel. There are no fewer than 11 Green Man bosses in the nave ceiling and a great deal of fine seventeenth-century woodwork, including a pulpit dated 1623. The magnificent wooden eagle lectern was carved by local eccentric, barber and taxidermist Jabez Good.

St Peter and St Paul’s large and imposing tower can be seen for miles around and is an iconic symbol of Burgh-le-Marsh. It was built in four stages in the Perpendicular style of the late fifteenth to early sixteenth century, and is supported by buttresses. The bell chamber has pointed openings on all four sides.

In the 1880s, local people subscribed to a fund to purchase a town clock for the Market Square, to commemorate Queen Victoria’s Diamond Jubilee. Insufficient money was raised to build a clock tower, so it was agreed that the clock should be installed in the church tower, replacing an earlier one. So, on the north face of the tower is an unusually painted clock face, with the inscription:

Watch and pray for ye know not when the time is

This is, of course, as relevant today as when it was painted. The clock mechanism is now driven by three electric motors.

The tower houses a peal of eight bells, which ring out every day. The upper four were founded by John Taylor and Sons, of Loughborough. The fifth by John Harrison of Barton on Humber.

The eight bells in the tower have interesting inscriptions:

The treble, cast in 1898, weighs 6cwt 1qtr 3lbs [703lbs] and is inscribed:
‘The gift of Charles Walls, Physician and Surgeon 1898. Life giving
spirit o’er us move, as on the formless deep, give life and order,
light and love. where now is death or sleep.’

These 4 bells were cast at the John Taylor and Sons Foundry, Loughborough.

Tenor, cast in 1616, weighs 17cwt 2qtr 4lbs [1964lbs] and is inscribed:
‘Learn of John Holden all good Xtian people,
who gave this Bell to grace this Church and Steeple.’

Fonts are used for baptism. Baptism is the Christian act of formally welcoming a person in The Church.

Tradition has it that the ancient font, now in the south-west corner, was perhaps from the earlier church, St. Mary’s, and used here until replaced by the nineteenth-century font. On top of the font cover sits a gilded bird. It is an eagle, standing on a book and holding in its beak two pots, one for pens, the other for ink. It has been identified as the crest of the Worshipful Company of Scriveners. Scriveners have long been involved in the legal profession as notaries. This eagle was originally in the musicians’ gallery and George William Tozer (Vicar 1857-63) replaced the plain cross, with this unusual symbol. 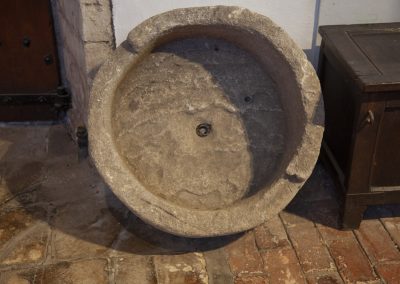 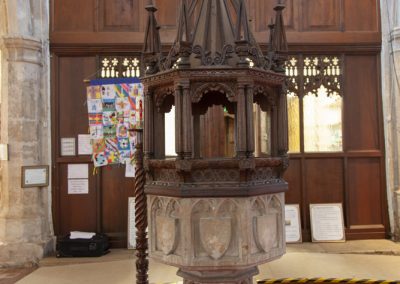 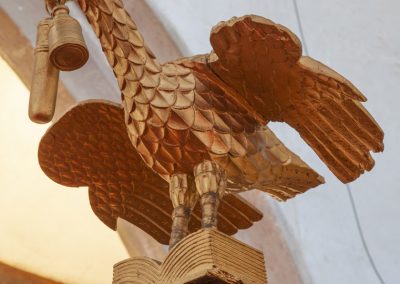 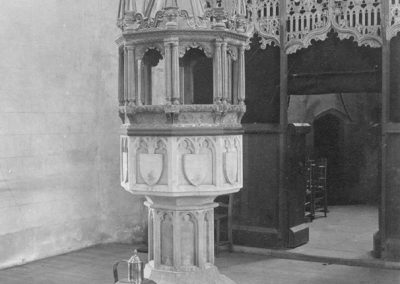 St. Paul’s Missionary College opened as a boys’ school in 1868, became a Missionary College in 1878, was closed in 1936 and then demolished in 1966. An isolated stone, commemorating the dedication of the extension to the buildings, on the green, near Windmill Drive, is the only memorial. Most of the chapel furniture is now in the Crypt Chapel of Sheffield Cathedral, whilst some of the stained glass in in Manby Parish Church, Lincolnshire.

Here in Saint Peter & St Paul’s, we retain various furnishings from the Missionary College’s chapel. It is a place of prayerful remembrance, honouring the men who attended the college and went on to spread the Gospel around the world. 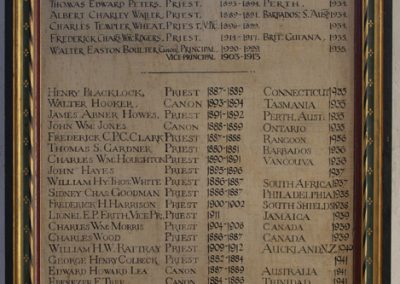 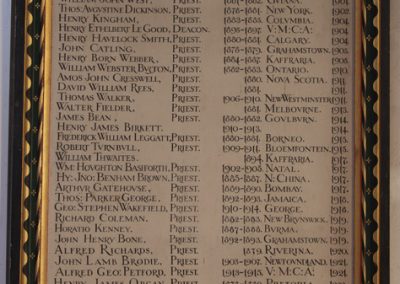 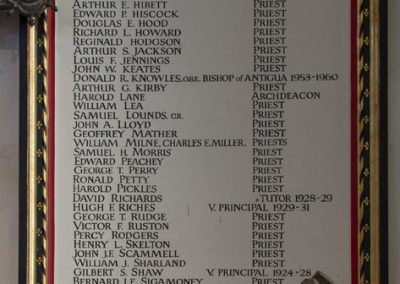 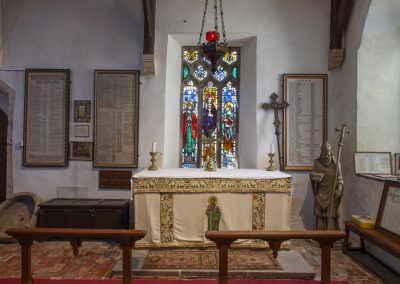 A Lady Chapel is a chapel dedicated to Our Lady, the Blessed Virgin Mary. The Blessed Sacrament is reserved here, which means it can be taken to the sick and dying at any time. The white light of the lamp indicates that the Sacrament has been reserved.

St Peter and St Paul’s Lady Chapel was restored by the Reverend G.H. Harris, upon his safe return from service as a Chaplin in the 1914-18 war. The altar is a Jacobean Communion Table, which formerly stood in the Chancel.

The statue of Our Lady and the Holy Child, along with 14 Stations of the Cross, were given by 75 subscribing parishioners in 1943. The Statue stood outside the screen for several years, before being moved into the Lady Chapel. The canopy over the statue was given as a memorial to the late Mrs. E Palmer in 1960. 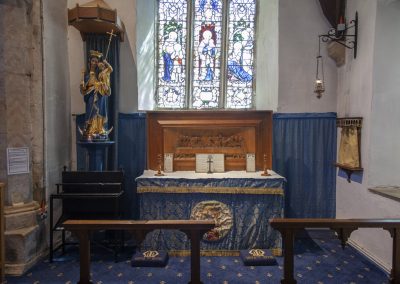 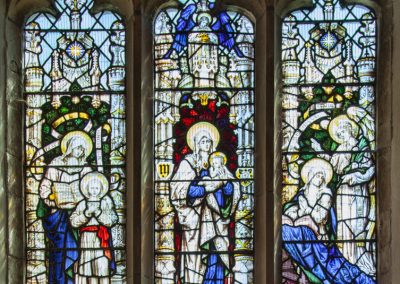 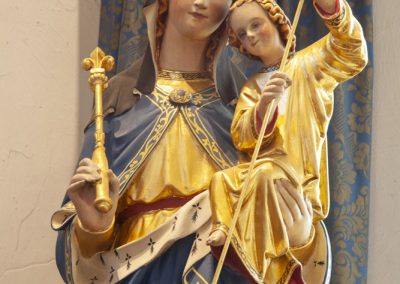 This chapel is named after John Holden, who died in the year 1503. He helped the St Peter & St Paul’s a great deal by giving land to the church, which provides the church with a rental income each year.

In 1389, three men from Burgh-le-Marsh travelled to Spain, mostly on foot. They were on a pilgrimage to Santiago de Compostela, where people believe St James is buried. Their return journey was made very difficult because of terrible storms. When they eventually arrived back in Burgh, a special altar was erected in thanks for their safe return. This little statue of St James was brought back from Spain by a more recent pilgrim.

The Nave is the main body of the church, where the congregation usually assembles for services. It is sometimes, as at St Peter and St Paul’s, separated from the Chancel by a Rood Screen. ‘Rood’ means Cross.  The figures on top of the Roof Screen show the Crucifixion of Christ, flanked by St Mary and St John, along with attendant angels. The principal figures were given by subscribing parishioners in 1963, and the attendant angels added in 1966.

A magnificent, sixteenth-century tie-beam roof spans the nave. A clerestory above north and south arcades floods the church with daylight. Historic wall paintings can be seen on the south arcade. 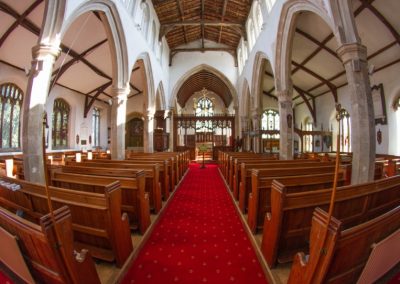 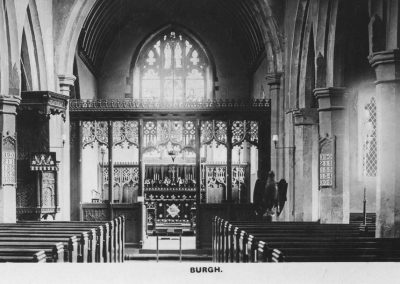 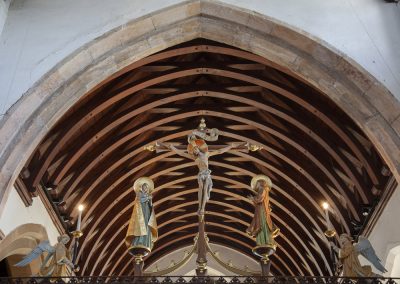 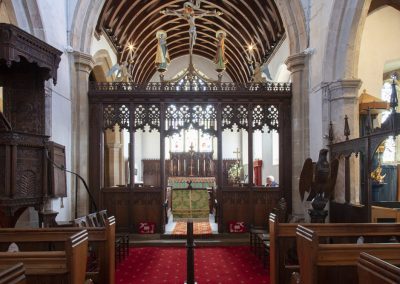 There are 11 Green Men, mysterious medieval faces which show foliage emerging from their mouths. These are thought to have come from the lost parish church of St Mary’s. It is likely that the Green Man began as a pagan symbol, yet it became very popular during the medieval period and lots of different types can be found in churches all over Europe. The true meaning of the Green Man is still a mystery.

The Chancel and High Altar

The Chancel is located at the liturgical east end of the church. It is the place where the priest celebrates Communion at the High Altar. There are four altars or special tables in St Peter & St Paul’s. The High Altar is used on Sundays. On it are placed six candles and a Crucifix. The priest will consecrate or bless bread and wine here, just as Jesus did during the Last Supper. Members of the church will then eat the bread and sip the wine in remembrance of Jesus, just as he asked us to do.

St Peter and St Paul’s Chancel was rebuilt in the nineteenth century. It boasts carved wooden reredos (altar screen) depicting Christ flanked by St Peter and St Paul. The saints are identifiable by their attributes or symbols: St Peter carries the Keys to the Kingdom of Heaven; St Paul carries a sword, the instrument of his martyrdom.

A lectern is a stand on which the Bible rests, and from where it is read during services. Lecterns are often in the shape of an eagle, a bird who, it was believed, could fly the highest and therefore closest to heaven, carrying the word of God to the four corners of the world. The eagle is also the symbol of St John the Evangelist, author of the Gospel of St John.

The fine wooden lectern was carved (some say using a penknife) by Jabez Good (1830 – 1911). Good was a barber by trade, and an eccentric who had a museum at his barber’s shop and compiled ‘A Glossary of Lincolnshire Dialect’.

The lectern is a memorial to the Reverend W. G. Tozer, who, after leaving Burgh, became the second Bishop of Central Africa. The stone, from his Bishop’s ring, is mounted on the foot of the chalice used every week at the Sunday Eucharist. 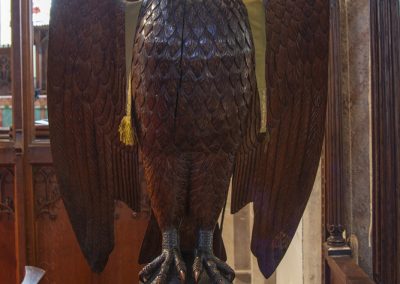 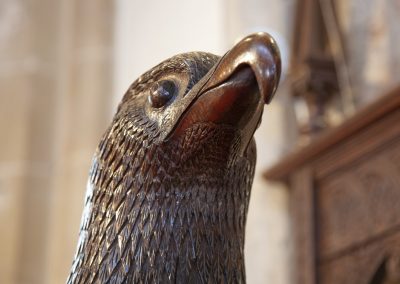 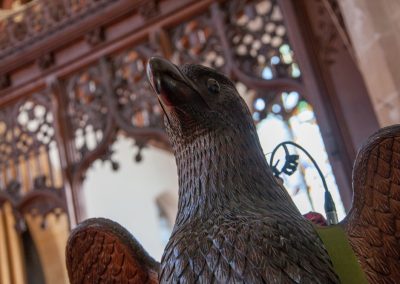 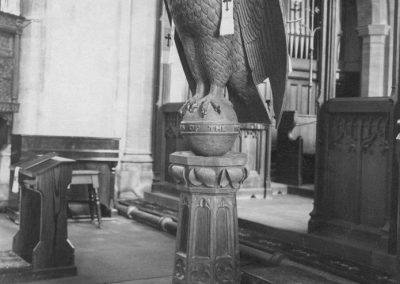 A pulpit is a raised stand from which preachers proclaim their sermons.

This is a particularly fine example of Jacobean carving, placed in the church in 1623, in memory of John Holden (d.1503), who left substantial acreage of pasture land for the benefit of Burgh-le-Marsh and Irby-in-the-Marsh.

At the Reformation, the John Holden Chantry lands were seized by the Massingberd family. The property was later recovered by the vigorous action of the churchwardens, who took the matter to court. This beautiful pulpit was then placed as a memorial to its benefactor, who also bequeathed one of the tower bells. The churches of Burgh and Irby still receive generous annual payments from the Holden lands, which are faithfully managed by the Feoffees (trustees) from both parishes. 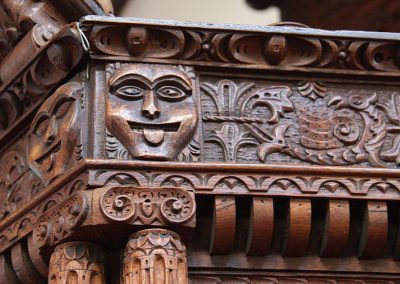 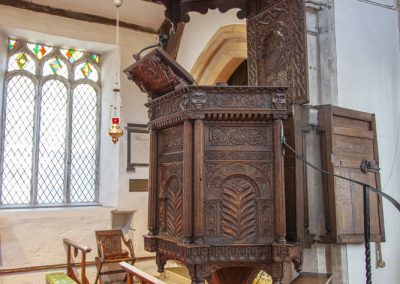 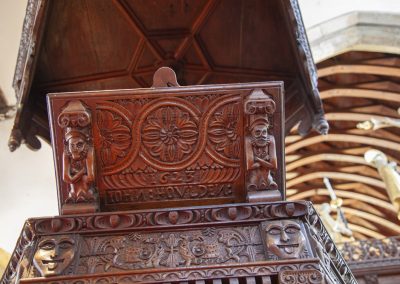 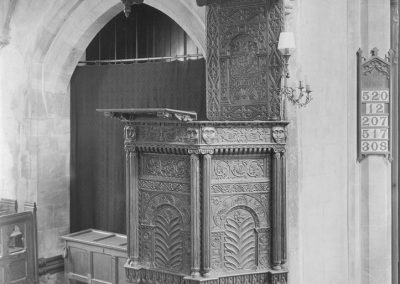 Church music was originally provided by local musicians. There are records of ‘cello strings and oboe reeds’ being purchased by the choir. The Musicians Gallery was in the tower, where remains of the stone staircase to the gallery can be seen in the cupboard on the south side.

The organ was originally at the west end and was given by the Reverend Tozer. It was built by Joshua Walker, founder of the firm of J.W. Walker. When the Chancel was rebuilt in the nineteenth century, the organ was moved to its present position. It was rebuilt and enlarged in 1957 by J.J. Binns of Leeds. This renovation work constituted a memorial to the late Reverend Gerald Hollidge Harris (Rector 1908-31), given by his wife, Margaret and son, David.

The Stations of the Cross

The episodes illustrated by the Stations are known as the Passion of Christ and are central to the Easter narrative. They help Christians to make a spiritual pilgrimage by contemplating the suffering of Jesus on Good Friday.

The fourteen Stations of the Cross are;

Jabez Good was a man of many interests and talents. He was a barber by trade, but was also a historian, artist, sign writer, taxidermist, Parish Clerk and compiler of ‘A Glossary of Lincolnshire Dialect’. One of his finest achievements was carving the lectern in St Peter and St Paul’s. in 1870 he entered a carved self-portrait into the London workman’s exhibition, winning a prize medal.

Jabez established his barber’s shop in 1857, and opened a museum next door. Upon his death in 1911, he was buried in Burgh churchyard. The exact location is unknown.  A chair believed to be Good’s barber chair can be seen in the church.